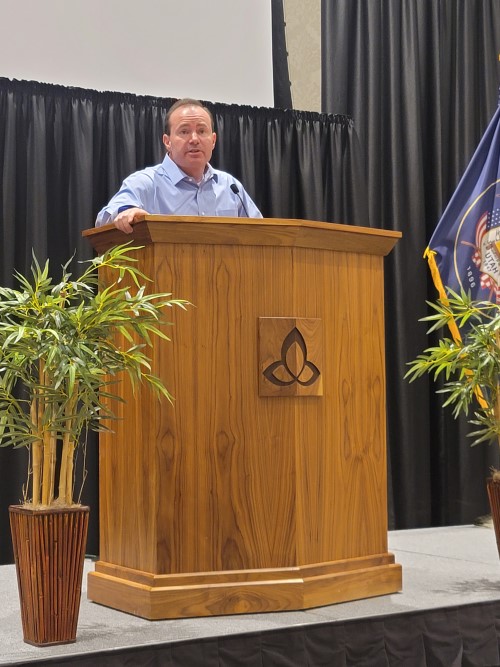 Utah Senator Mike Lee made stops around the Uintah Basin on Tuesday. Senator Lee
spoke and took questions at the Vernal Chamber luncheon, during which he emphasized
the importance of energy development into the future. “This is the most vibrant and
promising part of our entire state’s economy,” shared Lee, speaking of the Uintah Basin.
“Even with everything going on along the Wasatch Front with tech development, the
Uintah Basin is Utah’s future and it will play a major role in America’s future. That is one
of the reasons I worked so hard to make sure we had a Record of Decision issued on the
Uinta Basin Railway.” Senator Lee addressed a variety of topics which he expounded on
during his radio interview on Newstalk KVEL AM 920 and 104.5 FM that took place
after the luncheon. Inflation is hitting Utahans especially hard and inflation is caused by
one thing, shared Lee, and that is excessive federal spending. If Republicans get a
majority again after this election, then he believes they can at least stem the tide of
reckless spending as well as push for regulatory overhaul and energy policy reform.
When asked about attacks and accusations made by Independent Senate race challenger
Evan McMullin, Senator Lee noted that he’s never seen an opponent this nasty in a Utah
election, pointing to the Putin Puppet reference as a ridiculous lie aimed to slander him.
Ultimately, Lee stated he just continues to focus on what he stands for and hopes to have
the opportunity to continue serving as Utah’s Senator. Lee also made stops in Duchesne
County on Tuesday to round out his visit to the Uintah Basin.